Reference number of a Set is a required field that defines and distinguishes each.
Both to create and edit a Set, you should use the code originally used by Playmobil, no matter the number of characters (whether digits, letters or points); although, for clarity an simplicity, in Klickypedia will use a nomenclature that will make a glance identify certain characteristics.

As a feature to note, If the Sets belongs to an international license or export market will be automatically displayed. Three letter suffix added to the reference number will help to identify each particular market or license.
In this example we can see 4 sets that share the same numbering. The first is the official Playmobil version, the other three are Antex (Argentina), Famobil (Spain) and Playmobil USA respectively

Basically you can summarize the acronym for international licenses (export markets) as:

Do not worry, do not have to learn them. The Klickypedia automatically add these suffixes to the reference number if they were specified when creating or editing Sets.

Diferent Versions of a Set

An example that illustrates perfectly different versions would be the reference 3304. First, we can see the pair of cowboys, which corresponds to the official version released by Playmobil, and then two Spanish versions (note the suffix ‘-esp’). For clarity purposes and not mix different licenses, or with the official Sets, the version number are totally independent between markets.

Finally, to round off the richness and variety that Playmobil gives us since 1974, a third detail that we want to express clearly to us all: the different Revisions of the same reference number.

It is basically the case, nothing unusual, in which either the official version of Playmobil or any of its export markets launch several completely different sets sharing the same reference.
Again, as we do in the case of the Versions, we preferred not to mix Revisions between export markets for clarity.

Come up with another example, in this case the pirate 3570. In first place is shown the official version of Playmobil, thereupon that launched Famobil (note that being an export market Set does not share Version or Revision with the official one). The last two sets correspond both to Antex. Being different -though also pirates and similar Sets, but there are so many differences that can not be considered a Version but a Revision- each is automatically identified with the suffix ‘s1’ and ‘s2’ corresponding to the two Revisions that appeared in Argentina.

Everything is displayed automatically

Yeah!. When you create or edit a Set, each of these details (export markets, Versions and Revisions) are specified separately in the corresponding text field. Klickypedia will be responsible for organizing the content, you just update the text fields with the information you have. And if something is unknown, another playmo-fan from somewhere in the world will complete it.
This is the Klickypedia! 🙂
In this way, the rest of the community can see all the information attached as a suffix to the reference number. Simple and clear!

Remember, there is a text field for each Set information … and if you have any questions we will be happy to help 😉 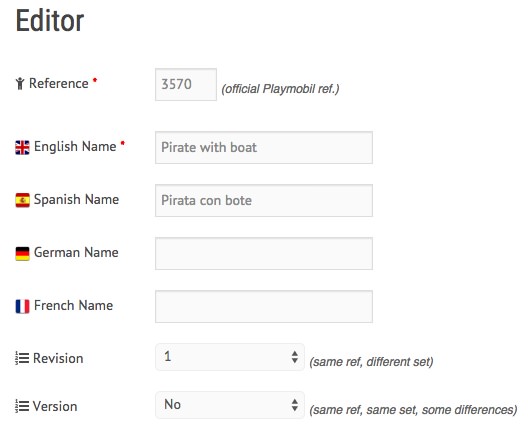